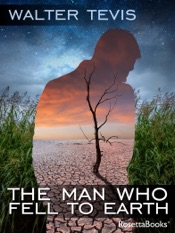 The “beautiful” novel that inspired the film starring David Bowie, from a Nebula Award finalist (The New York Times).

The Man Who Fell to Earth tells the story of Thomas Jerome Newton, an alien disguised as a human who comes to Earth on a mission to save his people. Devastated by nuclear war, his home planet, Anthea, is no longer habitable. Newton lands in Kentucky and starts patenting Anthean technology—amassing the fortune he needs to build a spaceship that will bring the last three hundred Anthean survivors to Earth.

But instead of the help he seeks, he finds only self-destruction, sinking into alcoholism and abandoning his spaceship, in this poignant story about the human condition by the acclaimed author of Mockingbird.

“Beautiful science fiction . . . The story of an extraterrestrial visitor from another planet is designed mainly to say something about life on this one.” —The New York Times

“An utterly realistic novel about an alien human on Earth . . . Realistic enough to become a metaphor for something inside us all, some existential loneliness.” —Norman Spinrad, author of The Iron Dream

“Those who know The Man Who Fell to Earth only from the film version are missing something. This is one of the finest science fiction novels of its period.” —J. R. Dunn, author of This Side of Judgment
This Day Wish You Were Here Dirty Dozen The Judge's List Autopsy Sea Hawke It Ends with Us The Breaker The Dark Hours The Lincoln Highway