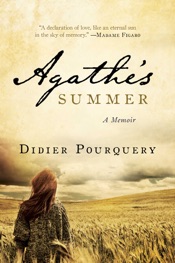 One morning in August of 2007, Didier Pourquery’s daughter, Agathe, only a few days away from her twenty-third birthday, stopped breathing. Seven years after her death, her father tells her story, based on his notes taken during the last three weeks of her life. He shares not only his sadness and loss, but also the joy that characterized his relationship with his daughter.

At her birth, Agathe’s doctors said the average life expectancy for a child born with cystic fibrosis was twenty-five years. Once he learned his daughter only had a few weeks left to live, Didier Pouquery began writing daily about her last weeks. The notes he took then became the source of this book: a homage that is full of hope and light, even as it boldly highlights deep human frailty and the pain of losing a child.

Pourquery alternates between an account of Agathe’s physical condition and a letter addressed to her after her death. We get to know her—and her father—through this lyrical and poignant portrait and ode. Who was this joyful and straight-talking girl? How did she grow up in the shadow of this looming disease? How was she able to help those around her, even as she faced a certain and early death? Although Agathe’s Summer is one father’s testimony to the short life of a child grown into a young woman, it is also the story of the love, hope, fear, and joy that speaks to all parents.
Las 48 leyes del poder Animales Ama tu sexo La Proposición del Novio Billonario Sos infeliz y es tu culpa Más patatas y menos prozac Llegada (Las crónicas de la invasión—Libro dos) Anhelo El ministerio de la verdad Cómo poner a un duque a tus pies (La comitiva del cortejo 1)