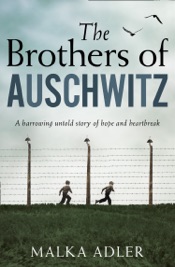 My brother’s tears left a delicate, clean line on his face. I stroked his cheek, whispered, it’s really you …

Dov and Yitzhak live in a small village in the mountains of Hungary, isolated both from the world and from the horrors of the war.

But one day in 1944, everything changes. The Nazis storm the homes of the Jewish villagers and inform them they have one hour. One hour before the train will take them to Auschwitz.

Six decades later, from the safety of their living rooms at home in Israel, the brothers finally break their silence to a friend who will never let their stories be forgotten.

Malka Adler’s extraordinary novel of a family separated by the Holocaust and their harrowing journey back to each other is based on interviews with the brothers she grew up with by the Sea of Galilee.

When they decided to tell their story, she was the only one they would talk to.

Narrated in a poetic style reminiscent of Margaret Atwood, this is a visceral yet essential read for those who have found strength, solace and above all, hope, in books like The Choice, The Librarian of Auschwitz, and The Tattooist of Auschwitz.

Praise for The Brothers of Auschwitz

‘I sat down and read this within a few hours, my wife is now reading it and it is bringing tears to her eyes’ Amazon reviewer

‘The story is so incredible and the author writes so beautifully that it is impossible to stay indifferent. I gave the book to my mom and she called me after she finished crying and telling me how much she loved it’ Amazon reviewer

‘It is a book we all must read, read in order to know … It is harsh, enthralling, earth-shattering, rattling – but we must. And nothing less’ Aliza Ziegler, Editor-in-Chief at Proza Books, Yedioth Ahronoth Publishing House

‘This is a book we are not allowed not to read’ Leah Roditi, At Magazine

Malka Adler was born in a small village near the Sea of Galilee in northern Israel.

She began her work as an author when she turned 50. After taking a creative writing course, she fell in love with the art.

Malka has written six books, four of which are about the Holocaust. She obtained her undergraduate and graduate degrees in educational counselling at Bar Ilan University and is a family and couples' therapist, writer and facilitator of several reading clubs.