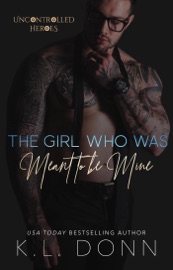 From USA Today bestselling author KL Donn comes the all-new Uncontrolled Heroes series where the heroes took over and decided they all get a little lovin'.

Jace Cooper spent his life waiting. Waiting to grow up, waiting to run his own business with his best friend Cade, waiting for the right girl.

Growing up took time, owning a successful motorbike shop was easy, and the right girl came when he least expected it.

From the minute his eyes laid upon Calla Davies, he knew she was the girl who was meant to be his. She would be the girl to own every piece of his soul.

If only he could show her that his size wasn't nearly as intimidating as she thought.

Calla Davies spent a lifetime apart from her father and sister. When her mother took her in the middle of the night, she was confused and heartbroken. For years she wondered why as she watched her mother's mind deteriorate.

After finally finding her family, Calla never expected to fall in love with a man more than twice her size and be afraid of him at the same time.

All either of them wanted was to be loved. Will Calla move past her fears and accept Jace's devotion for what it is, or will she wind up like her mother: broken and afraid?