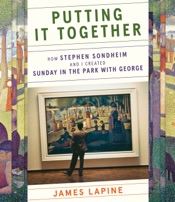 Putting It Together chronicles the two-year odyssey of creating the iconic Broadway musical Sunday in the Park with George. In 1982, James Lapine, at the beginning of his career as a playwright and director, met Stephen Sondheim, nineteen years his senior and already a legendary Broadway composer and lyricist. Shortly thereafter, the two decided to write a musical inspired by Georges Seurat’s nineteenth-century painting A Sunday Afternoon on the Island of La Grande Jatte.

Through conversations between Lapine and Sondheim, as well as most of the production team, and with a treasure trove of personal photographs, sketches, script notes, and sheet music, the two Broadway icons lift the curtain on their beloved musical. Putting It Together is a deeply personal remembrance of their collaboration and friend - ship and the highs and lows of that journey, one that resulted in the beloved Pulitzer Prize–winning classic.
His La sottile arte di fare quello che c***o ti pare Quelli che uccidono Dune Bugie a colazione The Legacy Fermare Pechino Il visitatore notturno Scrivimi ancora Never Quiet