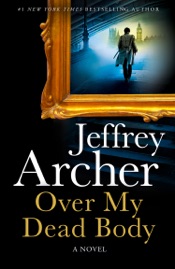 An unputdownable story of murder, revenge and betrayal from international number one bestseller Jeffrey Archer.

THE CLOCK IS TICKING IN THIS ROLLERCOASTER RIDE OF A THRILLER…

In London, the Metropolitan Police have set up a new Unsolved Murders Unit – a cold case squad – to catch the criminals nobody else can. Four victims. Four cases. All killers poised to strike again.

In Geneva, millionaire art collector Miles Faulkner – convicted of forgery and theft – was pronounced dead two months ago. So why is his unscrupulous lawyer still representing a dead client? And who is the mysterious man his widow is planning to marry?

On board luxury cruise liner the Alden, a wealthy clientele have signed up for the opulence and glamour of a trans-Atlantic voyage. But the battle for power at the heart of a wealthy dynasty is about to turn to murder.

And at the heart of all three investigations lies Detective Chief Inspector William Warwick, rising star of the department.

Only Warwick's genius for deductive reasoning, his fierce intelligence and his occasionally rash bravery – combined with that of ex-undercover operative Ross Hogan, reluctantly brought in from the cold – can bring the criminals to justice, and put his nemesis behind bars. But can they catch the killers before it's too late?

“Archer is a master entertainer.” —Time

“One of the top ten storytellers in the world.” —Los Angeles Times

“A storyteller in the class of Alexandre Dumas.” —The Washington Post

“Archer is a master entertainer.” —Time

“One of the top ten storytellers in the world.” —Los Angeles Times

“A storyteller in the class of Alexandre Dumas.” —The Washington Post

Jeffrey Archer, whose novels and short stories include the Clifton Chronicles, the William Warwick novels, Kane and Abel and Cat O’ Nine Tales, has topped the bestseller lists around the world, including the New York Times bestseller list, with sales of over 275 million copies. He is the only author ever to have been a number one bestseller in fiction, short stories and non-fiction (The Prison Diaries). A member of the House of Lords for over a quarter of a century, the author is married to Dame Mary Archer, and they have two sons, two granddaughters and two grandsons.
This Day Wish You Were Here Dirty Dozen The Judge's List Autopsy Sea Hawke It Ends with Us The Breaker The Dark Hours The Lincoln Highway