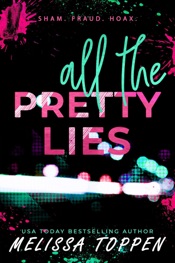 All words that describe my relationship with Callum Hanson.

It didn't start out that way.

We used to be friends.

That is until high school, when Callum decided he was too cool to be seen with his less than popular next-door neighbor.

So, imagine my surprise when out of the blue, after nearly four years of pretending like I don't exist, he offers to swoop in and save the day by promising to help me catch the eye of the boy I've been pining after for nearly two years.

I have to lie. To everyone.

Pretending to be his girlfriend turned out to be a lot easier than I thought it would. I was surprised by how well I fit into his world, and how well he fit into mine.

Before long though, the lines between fake and real started to blur. I began to see Callum as more than just Norwood High's star football player and manwhore extraordinaire. And the more time I spent with him, the more I wanted it all to be real.

But that's the problem with telling lies. No matter how pretty they sound, at the end of the day they're still lies.

I just wish someone would explain that to my heart.