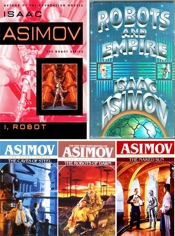 I, Robot,
The Caves of Steel,
The Naked Sun,
The Robots of Dawn,
Robots and Empire.

With these three, simple directives, Isaac Asimov changed our perception of robots forever when he formulated the laws governing their behavior. In I, Robot, Asimov chronicles the development of the robot through a series of interlinked stories: from its primitive origins in the present to its ultimate perfection in the not-so-distant future--a future in which humanity itself may be rendered obsolete.

Here are stories of robots gone mad, of mind-read robots, and robots with a sense of humor. Of robot politicians, and robots who secretly run the world--all told with the dramatic blend of science fact and science fiction that has become Asimov's trademark

The Caves of Steel

The first of Asimov’s robot novels, chronicling the unlikely partnership between a New York City detective and a humanoid robot who must learn to work together.

The electrifying sequel to Caves of Steel in which Elijah Baley is once more teemed up with R. Daneel. The two must travel to Solaria, where no human has gone in over a thousand years…

The Robots of Dawn

Called to the Spacer world to solve a case of roboticide, New York City detective Elijah Baley teams up with humanoid robot R. Daneel Olivaw. Together they are tasked with proving that the prime suspect, a renowned roboticist, is innocent of the crime.