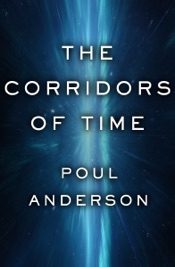 College student, ex-marine, and martial artist Malcolm Lockridge is in prison awaiting his trial for murder when he receives an unexpected visit from an extraordinarily beautiful woman named Storm. Claiming to be a representative of the Wardens, a political faction from two thousand years in the future, Storm offers the astonished young man a proposition: freedom in return for his assistance in recovering an unspecified lost treasure. But it is not long before Malcolm realizes that, in truth, he’s been recruited as a soldier in the Wardens’ ongoing war against their rivals, the Rangers. And this war is different from any that has ever been fought, because the battlefield is not a place but time itself.

Traveling backward and forward through corridors connecting historical epochs separated by thousands of years, Malcolm is soon embroiled in a furious conflict between the forces of good and minions of evil. But the deeper he is pulled into this devastating time war, the clearer Malcolm’s ultimate role in humankind’s destiny becomes, causing the troubled young soldier from the twentieth century to question whether he’s been chosen to fight on the side of good or evil . . . and if such a distinction even exists.

“One of science fiction’s most influential and prolific writers.” —The Daily Telegraph

“A terrific time travel adventure that will satisfy Anderson fans (and SF readers in general) . . . Dynamic and thrilling . . . an utterly terrific finale with a smart twist you don’t see coming . . . Pure gold, a perfect example of the sort of SF they just don’t write anymore.” —SFReviews.net

“Poul Anderson really was an amazing writer. . . . Re-reading [The Corridors of Time] now, I was again struck by how very good it is. . . . Beautifully written—Anderson’s best writing reaches an almost mythic level.” —Jo Walton, Tor.com

Poul Anderson (1926–2001) grew up bilingual in a Danish American family. After discovering science fiction fandom and earning a physics degree at the University of Minnesota, he found writing science fiction more satisfactory. Admired for his “hard” science fiction, mysteries, historical novels, and “fantasy with rivets,” he also excelled in humor. He was the guest of honor at the 1959 World Science Fiction Convention and at many similar events, including the 1998 Contact Japan 3 and the 1999 Strannik Conference in Saint Petersburg, Russia. Besides winning the Hugo and Nebula Awards, he has received the Gandalf, Seiun, and Strannik, or “Wanderer,” Awards. A founder of the Science Fiction & Fantasy Writers of America, he became a Grand Master, and was inducted into the Science Fiction and Fantasy Hall of Fame.

In 1952 he met Karen Kruse; they married in Berkeley, California, where their daughter, Astrid, was born, and they later lived in Orinda, California. Astrid and her husband, science fiction author Greg Bear, now live with their family outside Seattle.
Peril The Legacy Vanderbilt Last Round The Jailhouse Lawyer Apples Never Fall Faking It with #41 The Burning Enemy at the Gates The Perfect Image (A Jessie Hunt Psychological Suspense Thriller—Book Sixteen)